The resurgence of the delicate little cupcake over recent years has brought an interest in cupcake decoration which is far more fanciful than just adding icing and a scattering of sprinkles.

And what better time than Halloween for anyone to use their imagination and skills to come up with some imaginative scary cupcake decorations?

Would Halloween feel right without the spiders, bats, ghosts and witches of folklore? To start the ball rolling here are a couple of ideas that are easy to put together but effective - scary spider and bat attack.

What you will need for these decorations are cupcakes made with your favorite recipe, butter cream icing, a few large black jelly beans, licorice bootlace, licorice strap and food coloring in red and orange, plus white decorating gel.

The quantities will depend on how many scary cupcakes you plan to decorate.

To make scary spider cupcakes prepare your cupcake top with butter cream colored with red food coloring. In the center of the cupcake place a large jelly bean for the spider body.

Cut a further jelly bean in half and place the cut side facing down at one end of the body. This will be the head. Add a couple of dabs of white decorating gel to form eyes.

With licorice bootlace cut eight pieces to form the legs. Rather than placing the licorice flat on the cupcake try arching each leg from the body to form a little half loop.

This will make the spider look as though it is ready for action rather than having been squashed on the top.

For bat attack cupcake decoration ice the cupcake with orange colored butter cream. Place a black jellybean in the center.

Cut licorice straps to form the wings of the bat by scalloping one side of the strap and rounding one end of the other side for wing tips. P

Let your imagination run wild both with ingredients for decorations and with the designs, why not let your scary Halloween cupcakes form a table centerpiece? Ask the kids for their ideas and make it a fun family affair.

Cupcake decorations work well for the kid in all of us, young and old, and Halloween is a good time to let the child in us out for a bit of fun. 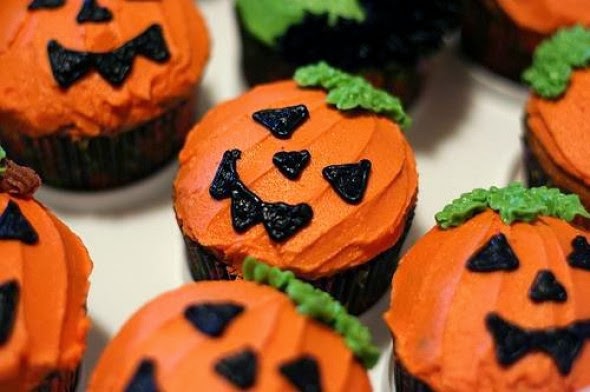 How To Make A Rose Cupcake Bouquet